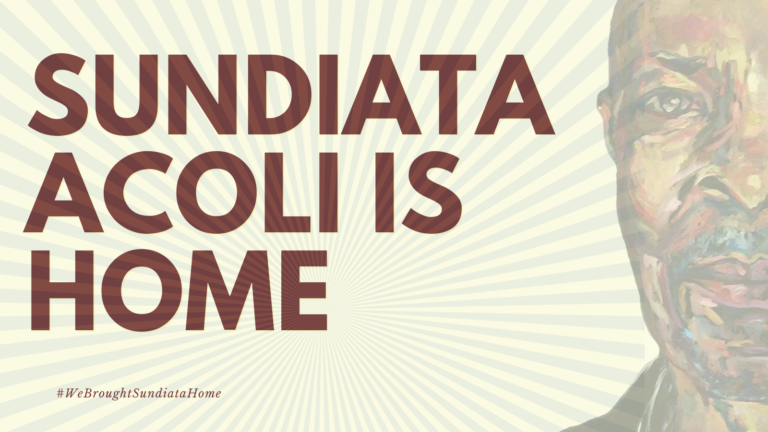 Sundiata Acoli, formerly known as Clark Squire, was convicted of first-degree murder of a State Trooper during a shootout on the New Jersey Turnpike in 1973. He was sentenced to life without the possibility of parole until after 25 years served. He was first eligible for parole in 1999, but it was moved up to 1993 due to good behavior. That parole request was denied. He is in a federal prison in Cumberland, Maryland, despite his conviction at the state level. He has been denied parole eight times in total.

Sundiata is 85 years old and his health continues to decline. He was one of the oldest people incarcerated in the nation. He contracted Covid-19 in 2020, requiring hospitalization and is experiencing post-Covid health complications; it exacerbated his cardiovascular disease, hypertension, emphysema, and glaucoma. He is also experiencing dementia.

Sundiata has had zero disciplinary infractions since 1980. Acoli completed at least 100 different programs for self-improvement and vocational training. He has also participated in numerous programs designed to alter an inmate’s perspective and modify his behavior, including Breaking the Cycle of Unproductiveness, Doing Time with the Right Mind, Commitment to Change, Criminal Thinking, and Life Strategies. He taught the class Criminal Thinking for eight years to soon-to-be-released incarcerated people. The course teaches cognitive-behavioral tools to avoid recidivism.

Sundiata also has taken a course called Voices of Experience to become an inmate peer to assist newly incarcerated people with institutional and social coping skills. He has also been selected to be both a prisoner representative and a member of the Honors Unit program.

Sundiata attended college at the age of 16, majoring in mathematics. After college, he worked as a computer analyst, working for NASA among other organizations, was a member of the Black Panther Party, and was active in voter registration efforts during the 1964 Freedom Summer. He is a father of two daughters and he has two grandchildren. He lives with his daughter and grandchildren in Brooklyn, New York.

In his 2016 appearance before the full Parole Board, Sundiata said, “I offer my deepest remorse and sincerest apology to Trooper Foerster’s family for my crime and I hope it will be accepted in the spirit offered and provide them with a measure of solace and peace.”

In a previous evaluation, a licensed psychologist noted that Sundiata expressed regret and remorse about the involvement in the death of the state trooper and that she believed he changed over the years due to his age, participation in counseling, and also because the political climate had evolved, such that violence was no longer necessary to effect change.

Acoli also stated to the doctor that he had no interest in being part of the Black Panthers, Black Liberation Army (BLA), or any derivative group. Acoli further expressed regret about missing out on raising his daughters and not being a ‘real father’ to them. The psychologist also stated he would be expected to transition into the community if released.